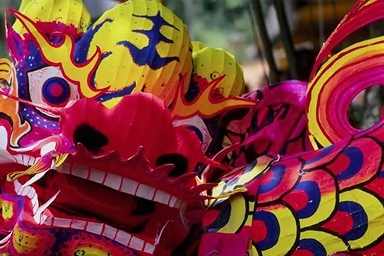 This style really is the core of all Chi Lin Martial Arts. The Chi Lin and The Dragon are related in Chinese Mythology. The actual Chi Lin is a mythological creature that is directly below the Dragon on the family tree. The Dragon is often associated with storms, rain and thunder. The Chinese consider the Dragon a holy creature. Powerful and benevolent. The Dragon is the highest ranking mythological creature in oriental mythology.
​
The art encompasses all the other animal styles, but is also a style all on its own. Long arm techniques, deep stances, coiling of mass and the release of that mass through momentum are parts of what the student learns. This is more of an "internal style", where momentum is generated by body alignment and the entire body moves together and is connected. Other styles share this quality as well, but I think in Dragon, its even more obvious. There is little movement on the surface sometimes, but lots of movement going on inside. Shifting mass and coiling mass while striking and blocking.

Some techniques in Chi Ling Pai are Whipping Tail of the Dragon, Circling Dragon Punch, Emperor Dragon Block, Mighty Dragon Block and Descending Dragon Punch.
Iron Palm training may also be used to train the hands of a student in the Dragon Style. In fact, the Iron Palm Training can be expanded to include more of the Iron Palm Art.
Many different bags, and herbal lineaments are used in different ways to develop the student. Chi Gung and Nui Gung Training is also used.
No one who is below the age of 18 should practice any of the special hand training. Their bodies are still growing. The training should be done when the growth of the body stops.