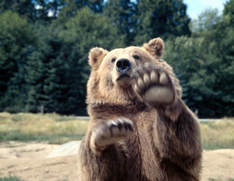 Bear is a very powerful style of fighting that uses the palm and rolling body movements to attack with.

This fighting art is an internal style where mass is used in refined movements to generate power and speed.

These movements are practiced until second nature. The fighter moves the whole body at once, while the arms and palms reach out to attack opponents.

These are usually not wild or large movements. In fact, they are quite controlled. Although the movements are loose, the positioning of the fighters arms and hands are very protective, rounded and strong.
​
Generating what is commonly known as Pung strength, power is generated from the ground and is used when both attacking and defending.

The attitude of the fighter is alert and constantly moving. Sometimes the movement may appear lumbering. This is a fake however, as the bear is graceful and extremely powerful and violent.
Many big and tall people fit well into this style of combat.